People have different interests and musical tastes and one single teaching method does not work for every student.

You may want to learn to read musical notation and theory, just play tunes, or may want to become a better improvisor or explore genres such as contemporary music, experimental or jazz.

Whatever it is, our ambition is to understand your attitude towards learning and follow that path in order to make you progress and learn valuable saxophone skills for a lifetime.

Our mission is to help you master the saxophone by bringing you inspiration, motivation and passion in a vibrant saxophone community for people of the world 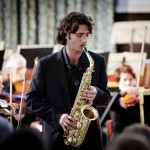 Martino is a saxophonist, composer and film composer. Born in Costa Rica in 1983 to parents of Italian and Costa Rican heritage and raised in Italy.
Martino is an alumnus of the Berklee College of music where he was granted the North American Scholarship, Martino was also sponsored by DeSono Associazione per la Musica, CRT Master dei Talenti and the Mosco Carener award to study at the Royal Academy of Music in London (PGDip) , where he graduated with a DipRAM. He previously studied at the Conservatorio G. Verdi of Torino (BMus).

Martino works extensively across the UK as a soloist. He has recently self-released his first album of original compositions entitled Melancolia Feliz. He is a dedicatee of new works by contemporary composers and has delivered world premiere performances in several venues in the UK, Italy, USA, Mexico and Costa Rica including the SouthBank Centre, Ronnie Scotts, Bolivar Hall, Teatro Regio di Torino, Universidad Autonoma de Mexico (UNAM), Teatro Nacional de Costa Rica among others.

Winner of the Costa Rica Young Soloists competition in 2007, he has appeared as a soloist with the National Symphony Orchestra of Costa Rica and alongside international artists including the legendary Hermeto Pascoal, drummer Peter Erskineand harpist Katrin Finch. 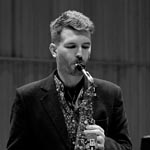 Matthew is a London-based soprano/alto saxophonist and composer. In addition to leading his own quintet, he has performed with Neon Orchestra, Dom Ingham Sextet, James Brady’s “Voyagers”, and the London Jazz Orchestra. Matthew is also keenly involved in education, and has taught on jazz courses including NYJC, Mehr Clef, NYJOS, Ronnie Scott’s “Big Band in a Day”, and Jazz Rehearsals London, in addition to his work at Brentwood and Abercorn schools.

Between 2013-15, Matthew studied at the prestigious Royal Academy of Music in London, where he graduated with a distinction in Jazz Performance. He has been fortunate to study with many of the UKs most well respected jazz musicians, including: Julian Siegel, Iain Ballamy, Gareth Lockrane, Martin Speake, Nikki Iles, and Jim Hart. He also has a keen interest in both composition and arranging, which he has developed under the tutorship of Pete Churchill. During his time at the Academy, Matthew had the opportunity to perform with John Taylor, Dave Holland, and John Hollenbeck. 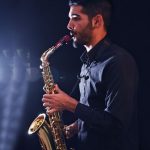 Manu Brazo is a young Spanish saxophonist who since moving to London in 2016 has established himself as one of his generation’s most versatile young musicians. He is praised for his unique sound and virtuosity, as well as for originality and spontaneity in his way of playing his saxophone.

Manu has been a guest on BBC Radio 3 In Tune on multiple occasions since he was named BBCs Introducing Artist of 2018 and featured on Classic FM, where his first performance was rated as “amazing and 100% colossal”.

His concert debut in the UK was in 2016 with Guildford Symphony Orchestra and in 2017 he performed Tansy Davies’ saxophone concerto with London Sinfonietta. He has performed as a soloist throughout  England and Spain but also with various ensembles including Croydon Symphony, Halifax Symphony Orchestra, Sevenoaks Symphony Orchestra, London City Orchestra, OSC (University of Seville), Orquesta Bética de Cámara and Orquesta FiIlarmonía de Granada. During 2021/22 he will have his German concerto debut at the prestigious Berlin Philarmonie.

Accompanied by pianist Bryan Evans MBE, Manu was invited by promoters Live Nation to be the opening act for Sir Cliff Richard at Greenwich Music Time Festival and to open ‘Downton Live’ at Highclere Castle to audiences of around 12,000 people. In 2018 he was selected to take part in the Britten-Pears Young Artist Programme where he performed at the Snape Maltings Proms conducted by Marin Alsop.

BOOK A NO OBLIGATION CALL

What our students say about us

London Saxophone School
4.9
Based on 25 reviews

Lesley Tulley
15:47 18 Nov 20
We struck gold when we were looking for a saxophone teacher for my 15 year old son and found Martino and the London Saxophone School. Martino’s approach to teaching is exceptional and his passion and commitment to his students not only learning the technicalities of playing the instrument but nurturing a love of music made for a very special teaching experience. As a parent I never had to nag my… son to practice as Martino’s enthusiasm for playing was infectious and my son always looked forward to going to his lessons. Martino was great at communicating with me regarding anything to do with the lessons. My son also had the opportunity to join the ensemble group Martino runs and had a wonderful experience learning how to play as part of a group and performing at the London Saxophone School concerts. He also had chance to perform at The Barbican with Martino and the ensemble. I have no hesitation in recommending Martino and the LSS if you are looking for a saxophone teacher for yourself or your child.read more

Era Emini (Era and Edon)
14:50 30 Apr 20
I am currently a student at London Saxaphone School and I cannot recommend their Saxaphone tuition highly enough. I have been learning Saxaphone with Martino for the past year and my progress has climbed exponentially. His teaching styles are versatile and engaging. What sets LSS apart from the others is the highly personalised teaching style to fit my personality and motivations. Excellent… tutor! Thank you!read more

ZANNA BABAJANA
14:42 30 Apr 20
I just want to take this opportunity to thank Martino at the London Saxaphone School. Thank you for everything you have done for my 9 year old son and 11 year old daughter. Their time with you have been truly enriching and the quality of teaching outstanding. They have grown enormously in their time with you and we really can’t thank you enough. Truly the best Saxaphone School in London!

Francesco Gallo
19:48 08 May 19
I am a student of the London Saxophone school since a year and half and I can guarantee that it is the best school for professional saxophone studies. The school has a massive range for you to develope different styles and techniques, I personally study classical music with the Alto Saxophone and I am managing to achieve all my goals with this great school. If you love music I definitely advise… you to join 👌🎷🎷🎷read more

Fran M
19:12 03 May 18
I was apprehensive in joining the Saxophone Ensemble as I have always just played at home and had never played within a group, which was what I desperately needed to bring my saxophone playing to a new level.I initially spoke with Martino over the telephone before I booked as I had many questions that I needed answering.Martino could not have been more helpful and he completely put me at… ease. He explained in depth what the ensemble was about and what I could expect to achieve from it.I have to say that the ensemble has been better than that I could ever have imagined. In just a matter of weeks my sight reading has improved vastly, along with my timing and intonation. The ensemble is open to all ages from school children to adults, who like myself took to learning the saxophone much later in life.Martino has a vast knowledge of not only composing and playing the saxophone. He also has a passion to ensure that each and everyone of his students is improving. He is extremely patient, knowledgeable and strives to get the best out of his group.Please do not allow you age or ability to be a factor for not joining. Martino makes learning incredible fun and I cannot wait for the next one!”read more
See All Reviews